My Life In Books – Jill Treseder

Such a challenge to choose a few books that influenced or changed my life from so many! But a great discipline to articulate how and why they were important.
Click here to read: My Life In Books – Jill Treseder.

Launch of ‘The Saturday Letters’ – and a Happy Coincidence!

The audience at the launch of my novella, The Saturday Letters, on Tuesday were quick to pick up on the parallels between Prince Harry’s engagement to Meghan Markle and the mixed-race marriage of Henrietta, the daughter of a Barbadian slave, to William a white British soldier which took place in Bermuda in 1865. It was most obliging of Meghan and Harry to announce their engagement the day before!

The novella is the fictional story of my own great-grandmother, Henrietta, who grew up in Bermuda, raised six children in Gibraltar and moved to England on her husband’s retirement in 1894.

Racial discrimination was a recurrent theme for Henrietta, and at the end of her life, living in Plymouth, she found herself excluded within her own family. This prompted her to write a series of letters to her granddaughter, giving an account of her life.

The Saturday Letters links to my previous full-length novel, The Hatmaker’s Secret, since the recipient of the letters is the hatmaker of that title.

I just hope that the novella (in a small way) and the forthcoming royal wedding (in a much bigger way) will contribute to easing race relations. Media reaction to the royal engagement shows that we still have the same lessons to learn. And I wish Harry and Meghan at least as long and as happy a marriage as Henrietta’s.

Read a review for The Saturday Letters

The Saturday Letters novella is available in digital format and in paperback from the Dartmouth Community Bookshop, from SilverWood Books and from Amazon.

Signing copies of The Saturday Letters 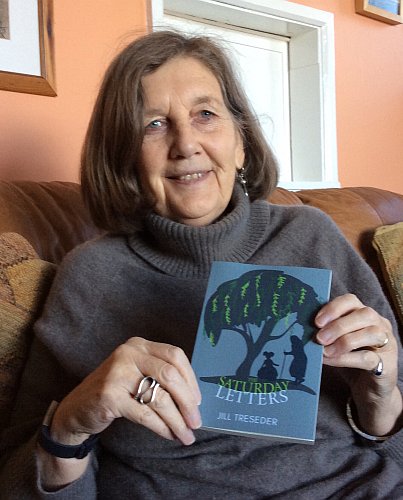 Thrilled with the cover of the novella and not long to wait for the book which goes inside it – publication on 21st November when it will be available from SilverWood Books (and Amazon) as an ebook and paperback. Isn’t it great?!

I loved visiting ‘Becoming Fran‘ country at the weekend – couldn’t resist the photo.  It was well worth the journey to Bristol to attend SilverWood social – lots of connection with other writers, a thought-provoking talk by Sanjida Kay, delicious food and a generous flow of prosecco and wine! What was not to like?

Had a great time and came away with some useful ideas and strategies. Many thanks to Helen Hart and all the team for a brilliant event.

And Friday will reveal the cover of the new novella – watch this space!

What better way to spend Saturday morning than chatting with readers and other writers while eating cake?

Devon Book Club’s Ian Hobbs organised this book and cake crawl in Dartmouth in cooperation with Rowena at the library, Andrea at Dartmouth Community Bookshop and Claire at the Dartmouth Bookseller.

Books and Cake at Dartmouth Library

Six of us local authors (Julie Archer, Lucy Willetts, Steve Stevenson-Olds, Clare Welsh, Damien Boyd – and me) gave brief talks during the morning, there was a treasure hunt/quiz (to ensure people paid attention!) and CAKE! Everyone had the chance to visit each bookshop and Claire gave out goody bags. Even the weather helped – not rain, just a refreshing mist gently falling!

Big thanks to all those who came along, who organised it all and who baked cakes!

I’m excited to have signed a contract with SilverWood sBooks who will be publishing my new novella, The Saturday Letters, under the Silverwood digital sBooks imprint in November. It is a companion story to The Hatmaker’s Secret. I’m also very delighted with the cover but that’s still under wraps – watch this space!

It was a privilege to dip into the buzz of the creative Frome community for a day at the Small Publishers’ Fair in the dramatic setting of the Salt Mill, Frome on Saturday. What a friendly bunch of people! Six of us SilverWood-published authors manned – and womanned – the SilverWood Books stand, alongside other indie publishers, writers and the Frome Writers’ Collective.

We were generously plied with tea, coffee and water and delicious tapas was served from the cantina just outside with plenty of seating in sun and shade – you could sit at tables named from Madrid to Ibiza and tuck into gazpacho, tortilla, seafood salad… etc.

A steady stream of book-loving people visited the event but there was also plenty of time to chat!

I particularly enjoyed swapping stories with fellow authors about how we came to write our various books, where, why and how we write, and discussing the themes we’ve been following in our work. There was also the opportunity to engage with other stall holders and hear about their concerns and passions. I even sold some books which felt like a bonus, rather than the main purpose of the day.

This is the second year that this event has happened and it looks set to become a tradition. Let’s hope so! It’s part of the much longer and broader Frome Festival and I wish I could have stayed longer to enjoy the range of music and performance in other venues in the town.’

Another bonus was the lovely B&B I stayed in and the surprise of selling three books to a Danish woman at breakfast!

Had an entertaining writerly morning at Tiverton Litfest ‘meet and greet’ event last Friday, meeting writers and readers in the library.

Me with local author, Lucy Willetts.

Thankfully the weather had cooled down, and my boxes-in-a-suitcase strategy worked well for transporting the books.

It was great to meet Facebook friends in person and spend time chatting, looking at books and eating jelly babies – which was an unexpected bonus!

Other authors had been so imaginative in setting up their stalls and giveaways. Free bookmarks are not enough! Snacks are the way to go.

And I did sell some books, too!

‘The Hatmaker’s Secret’ is Devon Life Book of the Month!

Thrilled to be book of the month in the July issue of Devon Life! I couldn’t ask for a better review from Annette Shaw who interviewed me for the Bookshelf feature.
Top tip – it’s very near the front of the magazine!

I received this account of a Tetbury, Gloucestershire Bookclub’s discussion of The Hatmaker’s Secret:

“We discussed The Hatmaker’s Secret on Tuesday – 10 of us. Some people loved it – and used that phrase. Others grew to like it as it progressed. Just one person had not got into the book.

We had a rich discussion about whether people ‘liked’ Thea (mostly not), but could understand how she became as she was, and found Dadser a lovely character. People told stories of colour appearing in families. We discussed Lily’s diary – the different voice these entries bring and how they say some wonderful things… and much, much more.

We also discussed writing style, and got into more detail, like balancing show and tell and whether just occasionally there is a bit more ‘tell’ than some people needed. People really liked the form, with different voices giving movement and keeping the reading exciting.  One member thought the dialogue good, having experimented herself at a Freefall workshop and found how hard it is. One person had wanted to skip the conversations between Kate and Daniel, thinking them a bit dull, but other people thought they portrayed the relationship well.”

This was a discussion of the first edition of the novel. I’m glad to say that I cut out a lot of excess “tell” when editing for the second edition. It was good to recognise that I’ve become a better writer! The new version is crisper and leaner.

This group were evidently not confused by the number of family members and generations, but as this has been an issue for some readers in the past, I have addressed this in the new edition by including a list of key people at the front. – Jill

On Friday a glass of prosecco helped to loosen inhibitions as a buzzy group of readers and writers described their favourite books in a game of ‘Just a Minute‘ meets ‘Desert Island Discs‘, the invention of organiser Annette Shaw. Amid much laughter, all the rules of no hesitation, deviation or repetition were thoroughly broken – along with any ice.
On Saturday morning, best-selling author, Jane Corry spoke of her process of research and writing for her thriller My Husband’s Wife. This was followed by yours truly doing a double act with Victoria Suter of NHS Southwest Leadership Academy. Victoria talked about the work of the Reading Agency, the benefits of reading and bibliotherapy, or books on prescription. I spoke of why I read and why I write and how closely these are linked.
After a delicious lunch, well-known local author Kate Furnival talked of her research, and writing her novel The Liberation set in postwar Italy.
There followed a news and networking session where several local writers told their story, including debut author Julie Archer of Cocktails, Rock Tales and Betrayals fame, who also played a vital role, managing the admin for the whole event.

Me with Victoria Suter of NHS Southwest Leadership Academy

Next week I’ll be at the Stoke Lodge Hotel in Stoke Fleming to celebrate World Book Night on Friday 28th and Saturday 29th April.

We’ll launch the bookfest on Friday evening with prosecco and canapes, followed by a few rounds of Desert Island Discs meets Just a Minute – which should be good for a laugh.

On Saturday morning and afternoon the guest speakers will be novelists Jane Corry and Kate Furnivall.

Victoria Suter of the NHS South West Leadership Academy will talk about the work of the Reading Agency and the health benefits of reading and I will join her to speak about journaling and why I write.

There will be a book exchange, news sharing, networking and lots of chat about – guess what? Books!

Here’s a sneak preview of the new edition cover for
‘The Hatmaker’s Secret‘!

I’m excited to have approved the final proofs for ‘The Hatmaker’s Secret‘ second edition, due out on 21st March, the first day of spring. A clearer, tighter, slimmer version of the original with a fresh new cover from SilverWood books.

Meanwhile I’ve been having fun learning something of Bajan, the Barbadian dialect, for my current work in progress. It means grappling with the question of how much to include in order to give a flavour, to honour the language and to avoid baffling or annoying the reader. Fortunately I’ve found an excellent native speaker to help with these judgements. I’m aiming at a first draft by Easter, and as Easter is obligingly late this year, I hope to make it.

Spring is springing all around which all helps with the creative process!